I've spent much of my career in software with automation an implicit and often explicit goal: in testing, in environment creation and deployments, in backups, etc. A conspicuous absence from this list has been the actual development machines I spend many hours each day using, which for me are my Mac desktop and laptop, and occasionally a VM or two. Traditionally, these have ended up at their working state through hours upon hours of gentle tinkering. It's a case of the cobbler's children having no shoes1, I suppose.

To correct this error, I've spent a portion of the past few weeks getting up to speed with GitHub Inc's excellent Puppet-based Boxen tool for provisioning their own internal OS X 10.8 Mountain Lion machines. Although the learning curve is not exactly shallow, and the documentation sparse at times - the payoff has been tremendous. You can use it to script absolutely every aspect of your development machine(s), resulting in the same degree of repeatability and auditability that we normally reserve for production servers.

From a clean install2, I've now got a fully-specified, version-controlled, boxen instance that, at a stroke can:

Assuming you're inclined to care about things like this, it's hard to overstate the satisfaction of kicking off this script and coming back to a fully-provisioned machine a couple of hours later. Best of all, Boxen is cumulative and idempotent, so changes can be made to my Boxen install (and then always specified and available in future) and re-run without worrying about it blowing up because it encounters its own previous completions.

If anything, everything I've written here understates how capable Boxen is. I'm presently using it for a couple of machines in a home office - GitHub uses it for their entire corporate fleet of MacBook Pros. Eventually the plan is that this becomes a centerpiece of the 'onboarding' experience at Plyfe, so new people can be productive instantly without messing around with rvm or redis-server or whatever else.

Bruno Oliveira captured the essence of why automation is so great in a widely circulated chart a year or so ago: 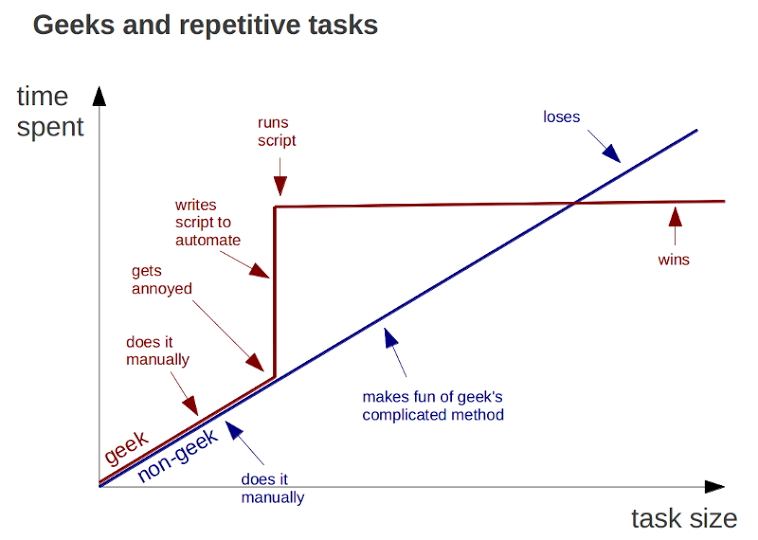 Occasionally I'm asked why I like OS X so much. There's a certain subset of the tech population that still thinks, apparently with genuine conviction, that Apple only makes toys. It's a bizarre and/or myopic belief in a world where Google Inc is known to be one of the largest institutional buyers of MacBook Pros (and I know from first-hand experience they certainly aren't buying them to mess about with GarageBand), but it persists.

Anyway, the very existence of projects like Boxen is just about the best answer I can give in response. There's so much cool stuff going on in software these days, and a huge portion of it is done with OS X. I might be moving in the wrong circles, but I simply don't see this level of innovation going on in the Windows world. And given how inherently less scriptable Windows is than anything Unix-based, it's hard to imagine an equal Windows-based peer of Boxen emerging anytime soon.

I like to think of OS X as having the best of both worlds of Windows and Linux: user-facing conveniences, plus a modern UI, plus a high degree of scriptability, plus access to forty-years worth of Unix utilities, minus the interminable and recurrent headaches with video card drivers, etc that you (or at least I) get with Linux. If I'm restricted to buying Apple gear to get that combination for now, so be it.